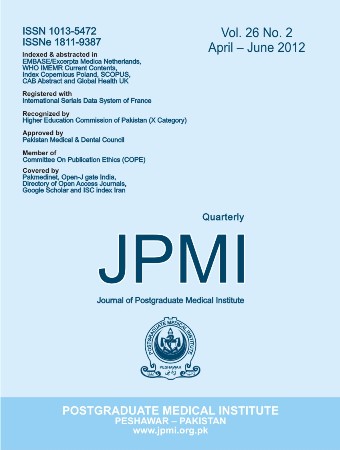 Objective: This study was conducted to investigate the frequency and type of ovarian tumors amongstpatients who underwent surgery for ovarian cyst diagnosed on ultrasound and also to compare a change inpattern of type of tumors between 2002 and 2009.

Setting & Duration: This study was carried out in the department of obstetrics and gynaecologyFoundation University Medical College, Fauji Foundation hospital Rawalpindi that is a tertiary carehospital, from 1st June 2002 to 31st May 2003 (Study period 1, n=90) and from 1st November 2008 to 31stOctober 2009 (Study period 2, n=93). All the patients who had ovarian cysts larger than five centimetresin size diagnosed on ultrasonography and planned for surgery were included in the study. All the relevantdetails were entered in proformas. Histopathology of excision biopsies was analysed.

Results: The overall incidence of ovarian tumors was 7.1% and 5.4% with a rate of malignancy 18% and5.4% in period 1 and 2 respectively which was statistically non significant (p>0.05). The most commonmalignant tumour was serous cyst adenocarcinoma during both study periods. The most common benigntumor was simple follicular cyst 25% during study period one and serous cyst adenoma 23% during period2.

Conclusion: The frequency and patterns of ovarian tumors has remained unchanged between 2002 and2009.