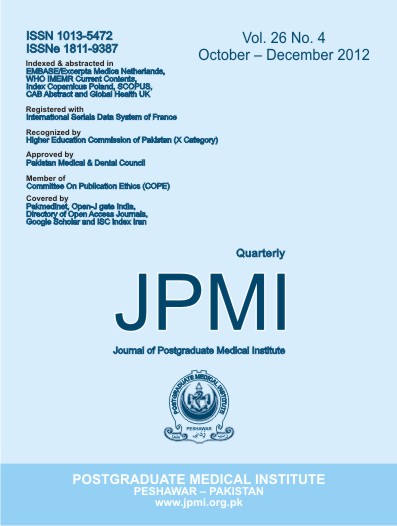 Objective: To compare the patient's acceptability of Pipelle and conventional dilatation and curettage (D&C) for endometrial sampling and to estimate the average cost of both the procedures.
Methodology: This comparative study was conducted at Department of Gynecology and Obstetrics Khyber Teaching Hospital Peshawar from March to June 2003. Patients complaining of abnormal vaginal bleeding and had endometrial sampling were included. The endometrial sample was obtained with Pipelle sampler in Outdoor Patient Department, while in case of inadequate tissue, double sampling technique with the same device was used to get appropriate sample. Patients requiring D&C were hospitalized. Patient acceptability was assessed on follow up visit by questionnaire by grading discomfort with procedure and hassle of admission to hospital. Cost of the procedure was estimated by collecting all the receipts of the expenditures.
Results: Out of 50 patients, there were 39 cases of dysfunctional uterine bleeding, 09 cases of infertility and 02 cases of postmenopausal bleeding. The histoathological report of 39 cases of dysfunctional uterine bleeding showed Proliferative phase endometrium, secretory phase endometrium, endometrial
hyperplasia, Endometritis, Atrophic endometrium and inadequate tissue in 12, 12, 5, 6, 2 and 2 patients respectively with both procedures. In terms of patients' acceptability, all (100%) were in favor of Pipelle. Cost of one outpatient endometrial Pipelle biopsy was Rs.500/- as compared to Rs.3200/- for D&C needing hospital stay.
Conclusion: As compared to D&C, Pipelle sampling causes less discomfort and is acceptable to the patient. On average, it is more economical than conventional dilatation and curettage.