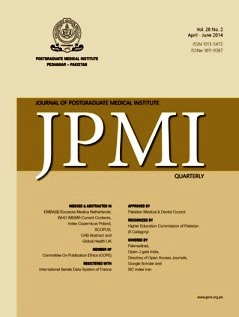 Objectives: This study investigated the injurious effects of Streptozotocin(STZ) induced diabetes on histology of rat salivary gland along with ameliorationof these effects by the antioxidant melatonin.Methodology: This prospective experimental study was conducted in the departmentof Anatomy, Basic Medical Sciences Institute, JPMC, Karachi for aperiod of 6 weeks from November to December, 2012. 45 male albino ratswere divided into 3 groups, containing 15 animals each. Group A was treatedas control, group B and C received 37 mg/kg STZ Intraperitoneally (i/p) onceat the start of experiment, whereas group C additionally received 10mg/100ml of melatonin (MEL) 3-days prior to STZ administration. After sacrificing theanimals, the parotid glands were processed for histological examination andviewed under the light microscope.Results: The histological findings demonstrated changes in the parotid glandmorphology of group B animals, such as the presence of lipid vacuoles inthe serous acini and degeneration of the acinar cells. There was a significantreduction in the severity of these changes in melatonin treated group C. Serumglucose was significantly increased in both group B and C as comparedto control. Total serum cholesterol was significantly increased in group B ascompared to group A and C.Conclusions: STZ altered the histology of parotid gland by lipid infiltrationand degeneration of acini. Melatonin suppressed the progression of damageinduced by STZ due to its antioxidant properties and also reduced total serumcholesterol levels, but it could not decrease STZ induced hyperglycemia.