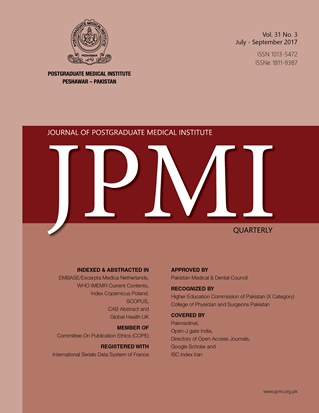 Objective: To study the histopathologic pattern of ovarian tumors in different
age groups.
Methodology: This retrospective study was conducted on 300 cases with histopathologically
proven ovarian tumors reported in histopathology section of
Department of Pathology, Lady Reading Hospital (LRH) Peshawar, from 1st January
2011 to 31st December 2015. All the patients operated at LRH or somewhere
else by any surgical procedure, but their specimens being processed in histopathology
section of LRH, were included in the study. Autolysed specimens and
those with unremarkable histologic findings were excluded from the study. For
histopathological patterning, classification system of the World Health Organization
(WHO) for ovarian tumors was applied. Hematoxylin and eosin stains
were used for histological study of the tissues.
Results: During the study period, 300 specimens of ovarian tumors were received
in the department of Pathology LRH Peshawar. Mean age of the patients
was 35.2 ±7.46 years ranging from 6-70 years. Eighty three percent (250) tumors
were benign, 1.7% (5) were borderline and 15% (45) were malignant. Most
common (80%) tumors of both benign and malignant origin were surface epithelial
tumors followed by germ cell tumors (18.7%). Benign surface epithelial
tumors comprised 80% (200/250) of all benign tumors whereas their malignant
counterparts comprised 78% (35/45) of all malignant tumors.
Conclusion: Among the histomorphologic variants of ovarian tumors, benign
tumors are more common than malignant ones for all age groups. Surface epithelial
tumors are the most common tumors out of both benign and malignant
classes. Benign tumors are common in young age below 40 years while malignant
ones are common above 40 years of age.

Professor and Head Department of Pathology