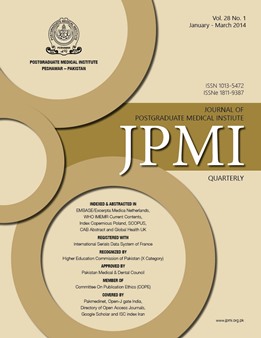 Methodology: This descriptive study was conducted at Ophthalmology department,Hayatabad Medical Complex Peshawar from 1st January to 31st December2009. All patients with diagnosed POAG, above the age of 30 years,having no lens or media opacity and ocular co-morbidity, were examinedthoroughly for patterns of optic disc changes associated with POAG. Frequenciesand percentages of the contour of neuroretinal rim, appearance of nervefiber layer, presence of optic disc hemorrhages, colour of optic nerve headwas noted. Descriptive statistics for disc were calculated for Vertical disc diameter(VDD), Cup/disc ratio (CDR), and Rim Disc Ratio (RDR).

Conclusion: Majority of the patients showed changes in measurements ofneuroretinal rim, so emphasis should be placed on the examination of neuroretinalrim in all patients of POAG.