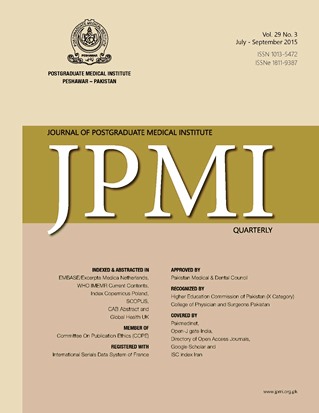 Objective: To determine the frequency of pneumothorax following ultra -sound guided thoracentesis in our department and its association with gauge
of needle in causation of pneumothorax.
Methadology: This is descriptive cross sectional study conducted at the De -partment of Diagnostic and Interventional Radiology, Shifa International Hos-pital (SIH), Islamabad from January 2010 to April, 2012. A total of 359 ultra-sound guided thoracentesis were performed followed by a chest radiograph
between January 2010 and April, 2012 fulfilling the inclusion criteria. All pro-cedures were performed by radiology consultants and residents. Generally 18
and 16 G cannulas were used. A few were done with 16 and 18 G spinal nee-dle and 21G syringe needle. Relevant data was collected from hospital data
base system on the performa and was analyzed for demographic variables,
frequency of pneumothorax, and its association with operator's experience
(residents or consultants) and gauge of needle by applying chi square test. P
value of < 0.05 was considered significant.
Results: 309 patients had thoracocentesis while performed by residents and
50 by consultants. Pneumothorax occurred in 22 of these 359 cases with an
overall frequency of 6 %. In 219 patients 18 G cannula was used and 8 of
these developed pneumothorax (3.6%). In 94 patients 16 G cannula was used.
Pneumothorax occurred in 11 (11.6%). Statistical analysis confirmed that the
frequency of pneumothorax was significantly increased following use of 16G
as compared to 18G (p=0.02).
Conclusion: The frequency of pneumothorax following ultrasound guided
thoracentesis increases significantly with use of 16G as compared to 18G
(p=0.02).