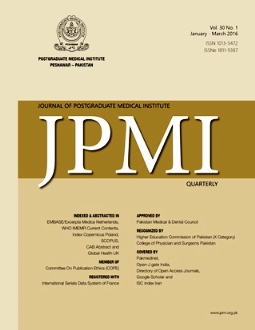 Objectives: To evaluate the level of knowledge and interest in Interventional
Radiology (IR) among medical students at a Pakistani Medical Institution.
Methods: After ethical review board approval, a cross sectional study was
conducted based on a survey distributed among 600 medical students at a
Pakistani 5 year medical school. 288 (48 %) responses were received. Survey
was based on 16 questions assessing knowledge, interest and perception of
Interventional Radiology.
Results: Among 288 respondents, 112 (39%) reported poor knowledge re -garding IR; 132 (45%) had never been exposed to IR. Only 46 (16%) students
chose to consider a career in IR. Main reasons for not considering a career in
IR were lack of knowledge (49 %) or lack of interest (34%). Hundred students
(34%) could correctly identify at least one IR procedure; 192 (66%) students
were unclear regarding routine duties of Interventional Radiologist as part of
a multidisciplinary team; 192 (66%) students stated that a 2 week radiology
rotation would be sufficient; 168 (58%) stated that a mandatory 2 week core
rotation in IR should be incorporated. IR lectures were rated as the most ef -fective means of learning.
Conclusion: Although level of knowledge and exposure to IR among medical
students was suboptimal, they showed interest in learning more about this
specialty. This deficit needs to be addressed in the undergraduate medical
curriculum, not only to attract future innovators for continued growth of this
specialty, but also to increase awareness among future referring physicians.