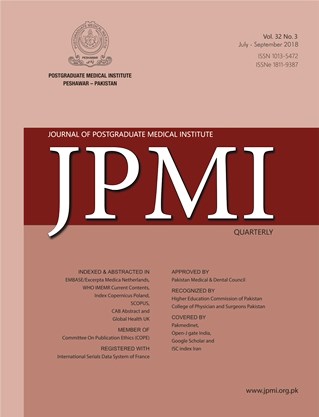 Objective: To find out the frequency of adenoid hypertrophy among adult patients with nasal obstruction.

Methodology: The study was carried out in CMH Bahawalpur and CMH Okara, from June 2015 to June 2017. Adult cases with nasal obstruction who reported in the ear, nose and throat (ENT) department in the above mentioned period were included in the study. Data was analyzed using statistical package for social sciences (SPSS) version 20. Frequency and percentage were calculated for qualitative variables while mean and standard deviation (SD) were calculated for quantitative variable.

Conclusion: Adenoid hypertrophy is prevalent in adults and is an important cause of nasal obstruction.