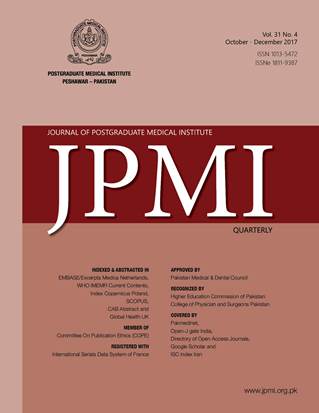 Objective: To translate and validate the Hospital Anxiety and Depression Scale (HADS) in Pashto.

Methodology: This study was conducted in Peshawar from July 2015 to January 2016 on 216 participants. The participants consisted of two groups; Students (n=111), and patients (n=105). The mean age of the sample was 21.8 ± 5.6 years with majority females [n=132 (61.1%)], unmarried [n=181, (83.2%)], and were educated to a level of intermediate or higher [n= 201, (93.1%)]. Three bilingual experts, using forward-backward method, translated HADS from English to Pashto. Both, English and Pashto version of HADS were given to the participants separately. Pashto version of Bradford Somatic Inventory (BSI) was also given to find out its correlation with HADS. The data were analysed using SPSS v. 20 and AMOS.

Conclusion: Pashto version of the HADS is a reliable and valid measure of anxiety and depression and can be used in community as well as clinical settings.