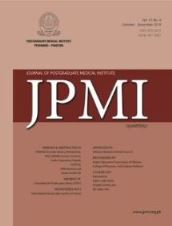 Methodology: It was a randomized controlled trial conducted in the Department of Ophthalmology, Lady Reading Hospital Peshawar from December 2015 till December 2016. Total 70 patients were enrolled on the basis of inclusion and exclusion criteria and were divided into group A and group B randomly on lottery method. Baseline astigmatism and visual acuity was calculated along with mean and standard deviation for each patient before surgery. Patients in group A underwent 20-gauge vitrectomy procedure while patients in group B underwent 23-gauge vitrectomy procedure. The patients were followed up at one week after the surgery. Post-operative astigmatism and visual acuity and their mean and standard deviation were calculated.

Conclusion: Vitrectomy with 23-gauge instruments showed decreased induced astigmatism than 20-gauge vitrectomy; however there was no significant difference in the visual acuity between the two procedures.