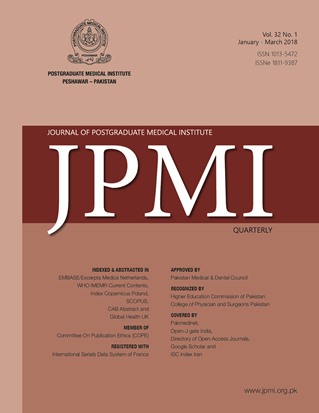 Objective: To determine the status of Diabetic Retinopathy (DR) and reasons for presentation at the time of initial ophthalmological examination of diabetic individuals.

Methodology: It was a descriptive study performed at the Department of Oph- thalmology, Hayatabad Medical Complex, Peshawar and at Saeed Anwar Medi- cal Center, Dabgari Garden Peshawar from July 2014 to June 2015. All diabetics (both type 1& 2), who presented for the first time to ophthalmologist were included in our study. Diabetic retinopathy was classified according to Early Treatment Diabetic Retinopathy Study (ETDRS) classification as mild, moderate, severe and very severe non proliferative diabetic retinopathy (NPDR) and prolif- erative diabetic retinopathy (PDR). Patients with vitreous hemorrhage, rubeosis iridis, neovascular glaucoma or tractional retinal detachment were classified as having advanced diabetic eye disease (ADED).

Conclusion: Majority of diabetic patients had some form of diabetic retinopa- thy at the time of presentation to the ophthalmologists.