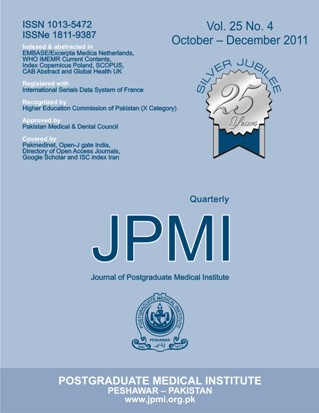 To study the effects of pregnancy on the disease activity in ulcerative colitis.

University Hospital Oman from July 2002 to December 2004. A total 60 diagnosed cases of ulcerative

included in the study. Those who conceived and delivered during the study period were inducted as

experimental group (total 30 patients), and those who did not conceive during the study period were

Out of total 60 patients, 30 patients who were included in the study group, 24 remained well with

exacerbation requiring oral steroids along with mesalamine. Two patients had severe exacerbation that was

controlled on parental steroids. Among control group, 25 had mild exacerbation, 4 had moderate

exacerbation and 1 had severe exacerbation during the study period. The eventual out come was good in

the risk of complications in patients of ulcerative colitis and also has got favorable outcome of pregnancy.