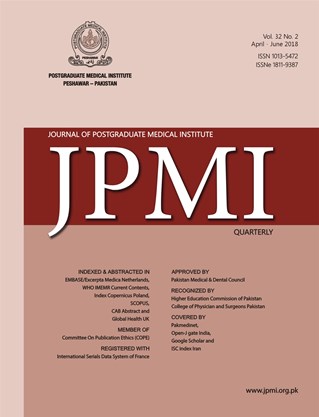 Objective: To determine the outcome and predictors of in-hospital mortality in patients presenting with acute poisoning to a teaching hospital.

Methodology: This was a hospital based descriptive study. A total of 128 pa- tients were enrolled from June 2015 to July 2017.Patients presenting with acute poisoning, of either gender and above 12 years were included by non-proba- bility convenient sampling method. Patients were divided into the survivors and the expired group. Outcome, mortality and predictors of in-hospital mortality were studied. For data entry and analysis, SPSS version 21.0 was utilized.

Conclusion: The overall mortality was 11.7% and the majority of expired pa- tients were young individuals of less than 40 years of age. Late presentation, delayed management, GCS below 8/15, shock, respiratory distress and poison- ing with aluminium phosphide or organophosphorus compounds were import- ant predictors of in-hospital mortality in patients with acute poisoning.