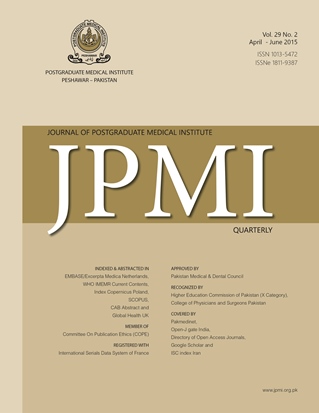 Objectives: To observe the perioperative morbidity and mortality rates of 100 transhiatal esophagectomies operated for esophageal carcinoma in a surgicalunit of a tertiary care hospital.

Methodology: Data pertaining to all patients that had undergone transhiatal esophagectomy from 2012 to 2014 were reviewed. The study groupcomprised 100 patients. Indication for surgery was esophageal cancer.

Conclusions: Transhiatal esophagectomy has been common stay and a safe rather feasible procedure. Oncological therapy has its role and better resultsare found in centers where the procedure is frequently performed.