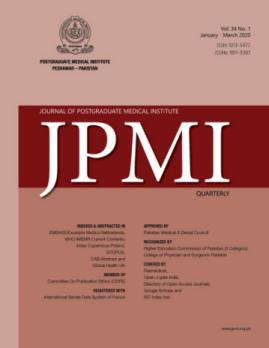 Objective: To determine the frequency of uropathogen isolates and their antibiotic sensitivity against commonly prescribed antibiotics in patients having indwelling catheter associated UTIs (CAUTIs) at our institution.

Methodology: Our study was carried out at the Departments of Internal Medicine and Nephrology, Lady Reading Hospital (LRH), Peshawar, from July 2018 to December 2018. It was a descriptive cross sectional study. Patients of both genders with UTI and who were catheterized with age ranging from 16 to 65 years were included through consecutive (non-probability) sampling technique. Specimens (catheter tip) were obtained under strict aseptic techniques to detect common bacterial isolates and their sensitivities against commonly prescribed antibiotics. Data were analyzed via SSPS (version 20).

Results: There were total 179  catheterized patients. Among them, 67% patients were female. Mean age was 47 ±2.15 years. Sixty six (37%) patients had catheter associated UTI and among them 42 (63.64%) patients were female. Escherichia coli was found in 37% patients followed by Klebsiella pneumoniae in 20% patients. Resistance to the commonly used antibiotics included amoxicillin-clavulanate (97%), quinolones (93%), ceftriaxone (86%), cefoperazone-sulbactam (12%), piperacillin-tazobactum (11%) and meropenem (11%).

Conclusion: In our setup, the frequency of catheter associated urinary tract infection was 37% and the most frequent bacteria found was Escherichia coli (37%) followed by Klebsiella pneumoniae (20%). A higher resistance was found to the commonly prescribed antibiotics.