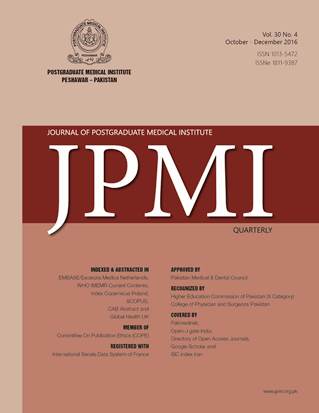 Objective: To study the effect of nutritional counseling according to health
belief model (HBM) for osteoporosis preventive behaviors in women referring
to health centers in Hamadan City, Iran.
Methodology: This quasi-experimental research was performed among 80
women, which were allocated randomly into two groups of forty-members
each of cases and controls. All participants filled the written informed consent.
Four educational session classes were performed in the case group. Through
three stages (before interposition, immediately after interposition, and two
month after interposition) these groups were evaluated. Analysis of the data
was performed by SPSS/18, using t test, chi square test, Fisher and repeated
measurement test. P-value was considered significant if it was less than 0.05.
Results: Important difference was not observed among the two groups in
terms of age, menarche age, education, job and BMI. There was no considerable
difference among the two groups in terms of the average scores of the
different structures of this model before the intervention. Mean scores of the
awareness and various structures of the model (perceived vulnerability, perceived
severity, perceived benefits, perceived barriers and performance) were
enhanced considerably in the case group over time (immediately after and
two month) after interposition (P <0.05).
Conclusion: Based on HBM, the training has positive impact on information,
opinions and performances of females about osteoporosis and its prevention.